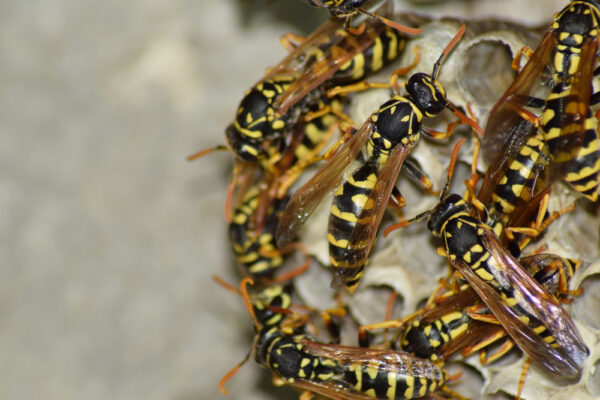 Identifying a Bee Infestation (and What to Do About It)

There’s more to bees than just their amazing ability to produce honey. Some states have more colonies of bees than others. In fact, Oklahoma is one of the U.S. states with the largest number of bees and infestations.

Professional bee removal services are trained teams who have the necessary equipment and experience with carefully removing bee colonies. The risks are lower when experts help get the job done.

The Most Common Types of Bees in Oklahoma

One of the most common types of bees around and also contributes to the most human bee stings.

It’s difficult to tell the difference between this bee and the European honey bee. The Africanized honey bee is also known as the “killer bee.”

As their name suggests, these bees create tunnels inside wood. This is where they will raise their young. You can spot these by their distinct black and yellow look. They look similar to bumble bees, but unlike bumble bees, they have fewer yellow hairs on their abdomen.

The bumble bee is a “friendlier” type compared to the others. Most times, it flies around flowers, where it finds its main source of food. Bumble bees also make smaller quantities of honey and their honey is not selected for commercial use.

Should I Remove Bees Myself?

No, removing bee infestations on your own is dangerous. Instead, you should always seek professional bee removal help. Never attempt to do this by yourself.

Bee stings can be fatal, and according to the CDC (Centers for Disease Control and Prevention), between the years 2000 and 2017 over 1,000 people died of bee, hornet, and wasp stings.

Symptoms of a Bee Sting and Allergic Reaction

Get medical help as soon as you recognize the symptoms of a bee sting.

Some severe allergic reaction symptoms include but are not limited to:

Moderate symptoms of a bee sting include — swelling that gets worse over two days and extreme redness.

Mild symptoms of a bee sting include — swelling in the stung area, redness and itchiness.

If it’s one bee sting, then it might not be a concern. Multiple bee stings could pose serious health dangers and could even be fatal. Bee removal in high risk areas is important.